The Folk House roof meadow is an experiment to make the most of every square inch in the city, maximising the potential for biodiversity and a riot of colour wherever we find it.

We’re using short-lived plants to create a vibrant, changing meadow where you might least expect it: on a roof. The value of meadows is well known- they cram huge numbers and types of plants into the space available, creating great habitats for a wide range of animals and make up the building blocks of the ecosystem. But whilst the value of meadows is well known, they are disappearing- around 97% of them have been ploughed up or built on over the past 60 years. This project is inspired by richness and diversity found in meadows and uses the basic principles that makes them so valuable to create a place that’s equally useful, right in the heart of the city.

At the same time, the project might tell us something new about plants- gardeners usually reckon that the best performing annual plants are sown the autumn before you want them to flower, or failing that, after the last frosts in the spring. But whilst we know what the plants prefer, it’s also important to know what they will tolerate- no soil, time or situation is ever perfect for what you might want to do, so it’s helpful to know what the limits are that you have to work within. For this project, we would like to know how late in the year it is possible to sow annual plants and still get a reasonable show of flowers. It’s not a rigorous test, but if we have an Indian summer and no early frosts, we can hope to see a flash of orange in November and at the same time provide some unexpected nectar sources to pollinators and know a little more. 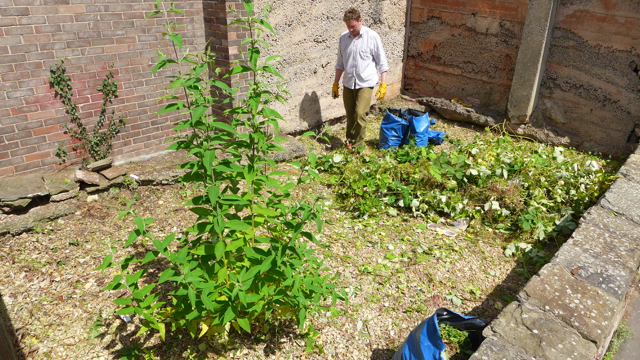 How we’re doing it

A week ago the roof was starting to become a overgrown with plants that like to put down woody roots and have the potential to damage it- mainly brambles and a few young maples. We cleared these away after they had flowered and sowed a carefully selected mix of annual and biennial herbaceous plants that have evolved to exploit stony, thin soils with smaller root systems. Typically the plants that like these conditions are relatively short and fast-growing- they’ve evolved to take advantage of a space and its limited resources quickly by reproducing faster than their competitors. This works to our advantage because they’re genetically programmed to flower as quickly possible using the least resources necessary, perfect for a stony roof.

So far the weather has been perfect- lots of sun with a little rain, creating warm soils with just enough water for the plants to draw up. We will come back in a few months to sow some more seeds- in the meantime, please come and see if any seeds are starting to germinate and tell us what you think. Even if nothing seems to be happening, it’s useful to know and tells us more about the plants that we work with and enjoy.

Projects like this highlight importance of making the most of every piece of land and encourage everyone to use whatever parts of their gardens or window boxes to do what they can. If you want to know more, either get in touch with Harry or get involved with one of the many organisations doing similar things like the Urban Pollinators or Avon Wildlife Trust. At a national level, the RHS is running a Greening Grey Britain programme which has a good range of resources and information.