A few weeks ago we visited Barking Riverside, a site that I had worked on for Dave Clark before moving to Yorkshire. As it happens, we chose a great time to visit:  it was 3.30pm on a Friday afternoon, and the newly opened George Carey Primary School finished for the day, with hundreds of children and parents leaving for the weekend.

I’ve always had mixed feelings about Barking Riverside: pride to have been involved tempered by the disillusionment to see it reduced in scope and aspiration. It’s a grand project, conceived of over 25 years ago to build around 11,000 homes, a school, a church, rail links, shopping and tech opportunities on the 443 acre site of the former Barking Power Station and at the same time provide desperately-needed housing at an affordable price (for London)- all this using the very best building and planning specifications available. Here was an opportunity to show how great design can create communities, work opportunities and solve political polarisation at a stroke.

After all the superlatives and big numbers, it was hit badly in 2007 by the financial crash, and in 2009/10 with a change in the political mood, the project finally started to gain some momentum, and Hyder, FDL and Dave Clark were brought in. Our role was to carry out the detailed design of the landscape, discharge the Reserved Matters and do the planting: of course, it soon emerged that we were expected to do more than that- our budgets for the landscape work were revised and then slashed, and an extensive value engineering project began, with redesigns and scathing assessments of the work from the planners who were originally involved. After all the hype and the emotional energy that went into securing and carrying out the work, it was hard not to feel down when the project was kicked around for political point scoring.

But perhaps point scoring was the part of the original purpose? It seems now that it was inevitable: Barking Riverside is a partnership project between the Homes and Communities Agency and Bellway Homes and tension between public and private responsibilities and opportunities will for ever be contentious. The broad agreement was that the site would be bought and remediated by the government, infrastructure to provide trunk roads and civil engineering systems would be jointly paid for and housing plots would be sold to developers: all this required close working every type of stakeholder conceivable, from statutory authorities such as London Borough of Barking and Dagenham, the Environment Agency and Transport for London, commercial investors such as E.ON and Virgin, charities like the London Wildlife Trust and leading consultants working in highly specific areas from living roofs to water voles. Years later, Barking Riverside is still subject to political wranglings and I’ve no doubt that it will continue like this until all 10,800 houses are built.

Visiting the site now, you can’t escape the feeling that it is a work in progress. The 1,000 or so homes that are available are surrounded by industrial estates and builders feverishly extending the site and everywhere there are signs of storage compounds and contractors. But the success or failure of the project will give us an indication of whether large-scale sustainable communities can ever be created from scratch. At the moment and in spite of the political sea-changes, there seems to be a huge demand for homes. Talking to the developers, house sales are through the roof, with each release being snapped up as soon they become available: Bellway Homes have a waiting list of 400 applicants, all with approvals-in-prinicpal for mortgages. People, it seems, want to live here.

Revisiting any site that you have worked on years later will always bring mixed feelings as you remember the long hours, compromises and set-backs, and intense emotional investment- but here at Barking this was tempered by the opportunity to try new things, use different materials, and above all, learn quickly from mistakes. Although the maintenance budget has clearly been cut even further, the habitats we created are starting to flourish, and the wide spaces and skies seem like a safe and exciting place to grow up. In many ways, perhaps the value engineering has been beneficial: the grass and granite landscapes envisaged by Gustafson Porter and Max Wan could have been out of place for a new development, surrounded by heavy industry, and somehow the rough concrete, seed mixes and timber that we designed with feels right. Talking to some residents, it seems that they feel a tangible sense of place and pride in their community. As we chatted to some kids running out school and chasing each other round boardwalks across the pond, I asked them what they thought of the place: “It’s sick!” they said. 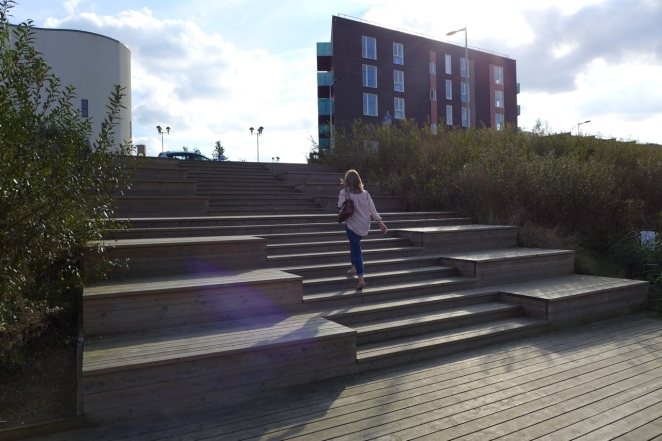 Swales are planted throughout the development to slow down the water course, managing a fully integrated SUDS design 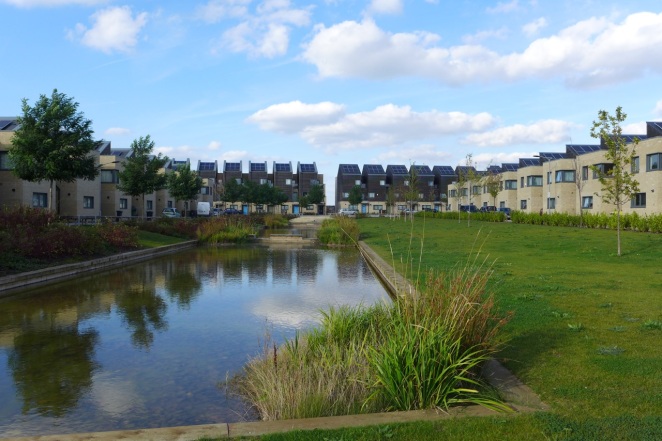 Every area of public space has been designed to create space for invertebrates and small fauna, the starting point for vibrant ecological systems 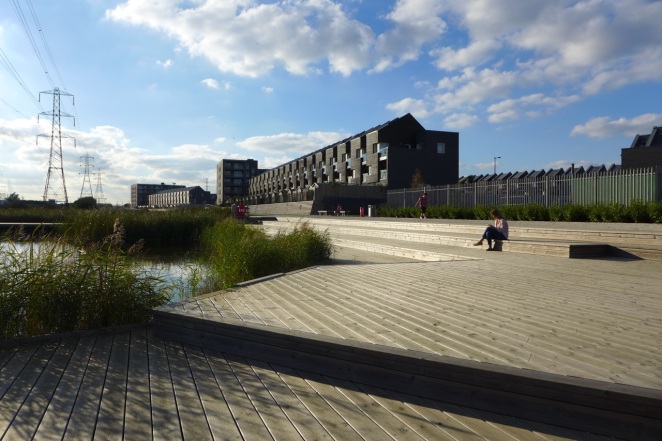 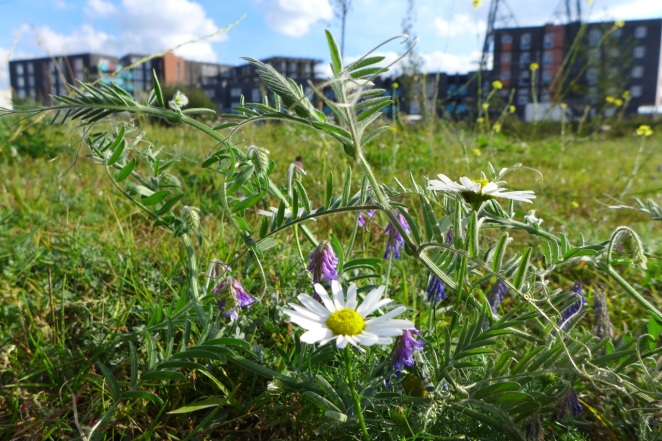 Even as late as October, interesting plant communities are still flowering their socks off in the remediated Buzzards Mouth Creek 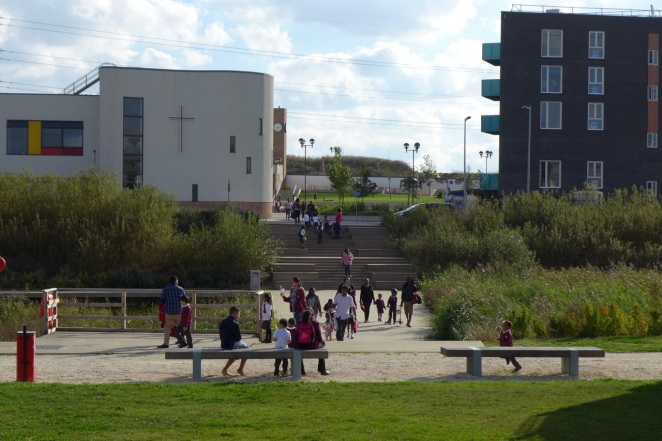